Woodstock: 40 Years On: Back to Yasgur's Farm

The original goal of producer Andy Zax was to re-create the entire Woodstock festival on 30 CDs[1]. Such a monstrous project failed because it was impossible to secure all of the necessary permissions from the artists and their record companies in order to include the complete performances by each act. The next goal was to compile a box set which included at least one song from every artist who performed at Woodstock. Also this failed. The licencing rights could not be secured for The Band, Ten Years After and the Keef Hartley Band. A decade later, Zax was able to attain almost all of the songs that were recorded at Woodstock (one Sha Na Na song was not recorded and the estate of Jimi Hendrix blocked two songs from being released) and put them into the massive box set Woodstock - Back to the Garden.

The box set, released exactly on the 40th anniversary of the Woodstock festival, is nevertheless impressive. Next to the six CDs is an 80 page large-format book with colour and black/white photos. The introduction is written by Andy Zax and the extensive liner notes by Bud Scoppa. The music is not reduced to bands performing songs. It covers the whole festival, the sound, the feeling, the historic moments. You hear the announcments by stage managers John Morris and Chip Monk, Abbie Hoffman's speech inflicting The Who's set, Wavy Gravy's sharing his ideas for breakfast for 400,000, the farmer Max Yasgur talking to the crowd and even the sound of the rainstorm. The music, announcements and speeches are now chronological correct which is a huge improvement over the earlier box set.

You also don't need to worry about the sound quality. Everything was sourced from the multi-track master reels. Well, almost everything: Melanie's and Ravi Shankar's set seem to be lost according to the liner notes. Their songs are therefore probably sourced from the mono tapes from the Wadleigh film crew[2]. A lot of the songs are officially released for the first time. Some of them were released in truncated from, for example Canned Heat's "Woodstock Boogie" which is now proper 28 minutes long.

It's also nice to finally see - and hear - songs from bands which are said to have screwed up their gig. The Grateful Dead "Dark Star" is still strong at merciful 19 minutes. CCR rush by with three songs demonstrating their catchy Rock 'n Roll composition ability. Also The Incredible String Band is present with two prominent folk tunes. 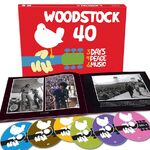 A photo of the sealed box set

Community content is available under CC-BY-SA unless otherwise noted.
Advertisement